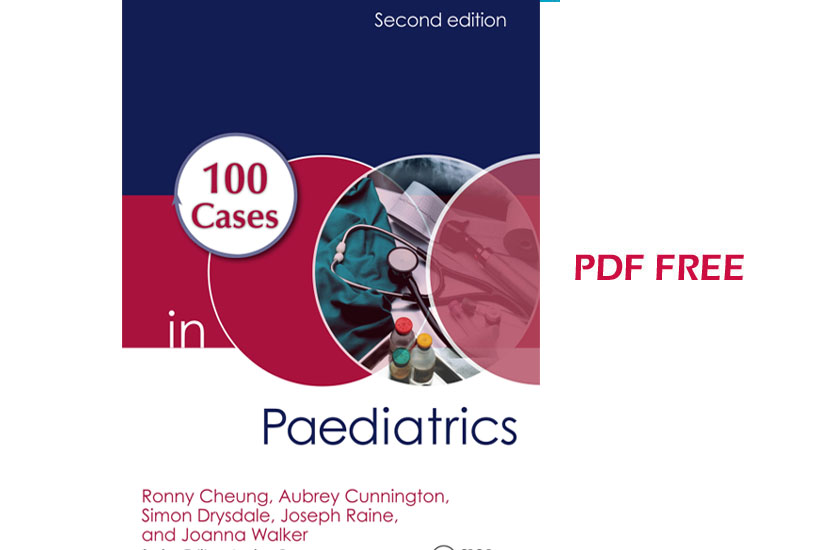 The new edition of this awesome book name 100 Cases in Paediatrics 2nd Edition PDF Free by  Ronny Chieng from the popular 100 case series explores common pediatric scenarios that the medical student and junior physician will encounter during hands-on training in the ward, in the emergency department, in outpatient clinics, and in the community, and likely to be included in qualifying exams. The book covers a wide range of presentations, from cough to constipation, organized by sub-specialty area for ease of reference. Comprehensive responses highlight the key points of each case and provide practical advice on how to deal with the challenges that arise when practicing pediatric medicine at all levels.

Here is the demo content of 100 Cases in Paediatrics 2nd Edition you can read a piece of content from this free medical book.

History: Leah is a 5-year-old girl who has been passing urine frequently for the last 2 days and complaining of pain when doing so. Her parents have brought her to the emergency department (ED) today because they measured a temperature of 39°C using a forehead thermometer and she had an episode of violent shivering. She has also complained of pain in her back and has vomited three times today. Leah had oesophageal atresia with a tracheo-oesophageal fistula diagnosed at birth. Her parents remember that some tests were done at birth but no other abnormalities were found. She has no history of urinary infections. They have moved home four times since she was born and have not had any follow-up for years. She is generally healthy and has recently started school, which she enjoys

She is flushed and miserable. Her temperature is 39.1°C, heart rate is 130 beats/min, respiratory rate is 25 breaths/min and her oxygen saturation is 99 per cent in air. Capillary refill is 2 s, heart sounds are normal and her chest is clear. She has a mild kyphoscoliosis. Her abdomen feels soft and is not distended, but there is a significant discomfort when palpating the right loin. Her external genitalia appear normal. Her weight is 17 kg (25th centile).

Leah’s clinical features and urine dipstick results are consistent with a urinary tract infection (UTI). The combination of leucocytes and nitrites on urine dipstick is highly predictive of a UTI. Urine dipstick should be a routine part of the assessment of a febrile child. It is important to recognize that the history and physical findings suggest that this is more than just cystitis. She has probably had a rigor, which may indicate bacterial products entering the bloodstream, she is systemically unwell and she has loin tenderness. These findings point to the diagnosis of pyelonephritis.

Differential diagnosis of stridor in an infant:

Symptoms of a urinary tract infection

It is useful to collect two midstream urine specimens before starting intravenous antibiotic therapy, so that the diagnosis of UTI can be confirmed. It is important to avoid contamination by skin flora, by cleaning the external genitalia first and then catching urine cleanly from the middle of the stream (i.e. do not collect the first drops) without the container touching the skin. This should then be sent for microscopy and bacterial culture. Her blood pressure should be measured and, during cannulation, blood should be sent for a full blood count, C-reactive protein, urea, electrolytes, creatinine and blood culture. Further questioning should determine if there have been any previous urine infections, recurrent fevers of uncertain origin, a previously diagnosed renal abnormality, a family history of vesicoureteric reflux or constipation.

In infants under 6 months and in older children with severe, atypical or recurrent urinary infections, imaging is required to determine if there is an underlying renal abnormality. Leah will therefore require an ultrasound of her urinary tract in the next few days. Prophylactic antibiotics are no longer used routinely after a first urinary tract infection but may be required in children with recurrent urinary infections. Leah may have an underlying structural renal tract abnormality predisposing to infection. The VACTERL association is the sporadic, non-random, concurrence of at least three of the following: vertebral, anal, cardiac, tracheo-oesophageal, renal and limb abnormalities. She should also have spinal X-rays to determine the cause of her kyphoscoliosis, e.g. a hemivertebra (see Case 61). It would be useful to obtain her previous medical records to find out more about her previous history and investigations.

Case 2: Child with Wheezing and Sneezing

Denil is a 7-year-old boy who has been brought to his general practitioner (GP) because his parents are worried about his breathing. Since he was 5 years old, his parents have noticed that he seems to have a runny nose all the time, especially in spring. He is constantly rubbing his nose, and over the past year also seems to be sneezing more often. He gets red itchy eyes too, particularly in springtime.

He continues to enjoy sports, especially karate, as much as ever. However, he stopped his Saturday morning football lessons last winter, as he found his breathing was getting quite tight, especially in the cold weather; he was feeling wheezy and it was increasingly hard to keep up with his friends. His parents state that he coughs at night. He had quite a severe eczema as an infant but improved from 8 months of age when he was started on a cows’ milk exclusion diet and commenced on hydrolyzed milk. He has been admitted to the hospital twice, both times at 3 years of age for a wheeze associated with a virus. He has never been diagnosed with asthma, and no one in his family currently has any breathing problems. However, his father, 11-year-old sister, and several members of his father’s family suffered from asthma in early childhood. He does not have any allergies. The family are non-smokers and have a pet Labrador

His weight is 24.2 kg, which is just below the 50th centile for age. He has profuse rhinorrhoea with large, inflamed inferior turbinates. His tonsils are not hypertrophied or inflamed. The respiratory rate is 18 breaths/min with no recession. Air entry is symmetrical with no crackles or wheeze. Peak expiratory

Danil has allergic rhinitis. He displays the classical symptoms of sneezing, nasal congestion and rhinorrhoea, as well as itchy eyes. Like most children with symptoms of rhinoconjunctivitis (“hayfever”), there is a strong seasonal component that would suggest a specific trigger. However, his symptoms clearly extend beyond this, and also strongly suggest asthma. Daniel’s constellation of symptoms and their chronology are typical for children with multiple atopic diseases. Eczema is usually the first to manifest in infancy. There may be a history of recurrent wheeze in the pre-school years, which is usually the period when a diagnosis of asthma is made. His nocturnal cough and shortness of breath on exercise and in cold weather suggest that he has asthma – and this is supported by his reduced peak expiratory flow rate. Symptoms of allergic rhinitis and rhinoconjunctivitis are often present in the early school years. This typical progression of atopic diseases over early childhood is often called the “allergic (or atopic) march”. The impact of these seemingly minor symptoms should never be underestimated. Even seemingly mild symptoms can cause significant distress to children over many years. Sleep, concentration, school performance and overall indices of well-being often markedly improve, once symptoms are appropriately treated. There is a strong genetic component to atopic diseases, but migrational and population studies have shown that environmental factors also play a significant role in the development of atopic diseases. Treatment is underpinned by two key principles, such as identifying any specific allergens and treating the symptoms of the resultant inflammation. Identifying potential allergens requires careful history taking and specific investigations. Allergic rhinitis and asthma are more commonly related to inhaled allergens, while eczema is more often associated with food allergens as well as contact with skin irritants. Common inhaled allergens include house dust mites, molds, pollens (both grass and tree), and animal dander. Many foods can be identified as allergic triggers – most commonly cow’s milk, eggs, nuts (peanut and tree nuts), and wheat. Many children who present with atopic symptoms will comment that they already avoid some foods, either because they have noticed that they cause overt symptoms, or often because they do not like them – which often turns out in retrospect to be due to a food allergy. Some families may have tried an exclusion diet at home. Investigations may be helpful to complement the clinical history and to identify specific triggers.

Tests are based on the detection of increased IgE antibodies to specific potential allergens, either through skin-prick testing or in blood using an IgE-specific allergen test (previously known as RAST – radioallergosorbent test). Although the IgE-specific allergen test is less sensitive and specific, it can be performed even if the child is currently taking symptomatic treatment with antihistamines, unlike skin-prick testing. A positive result on either test suggests that the child has been sensitized to the substance, but it cannot accurately quantify the severity of symptoms due to that substance – nor indeed that the substance is definitely responsible for the symptoms. A negative result is useful in ruling out potential allergens. Avoidance of an identified (or suspected) trigger can, however, be difficult. In cases where avoidance is not successful in eliminating symptoms, when no specific trigger can be identified or in the case of significant symptoms, medical treatment options exist to reduce

the inflammatory response which leads to symptoms. These include antihistamine agents (such as cetirizine) and nasal corticosteroids. There is early evidence for the use of immunotherapy in older children, particularly for inhaled allergens, in which small amounts of allergen are gradually introduced (usually subcutaneously) to stimulate tolerance. However, this is not yet widely recommended and should only be initiated by a paediatric allergist. Associated atopic diseases, such as asthma and eczema, will also need to be treated. Based on his symptoms and reduced peak expiratory flow rate (PEFR), Daniel should undergo spirometry to confirm a diagnosis of asthma before commencing treatment on inhaled corticosteroids. Acute symptoms should be treated with salbutamol as required. Children with severe IgE-mediated reactions are at risk of anaphylaxis, and should be prescribed intramuscular adrenaline (e.g. EpiPen), and they, their families, carers and school should be trained in its use. They should also be trained in providing basic life support