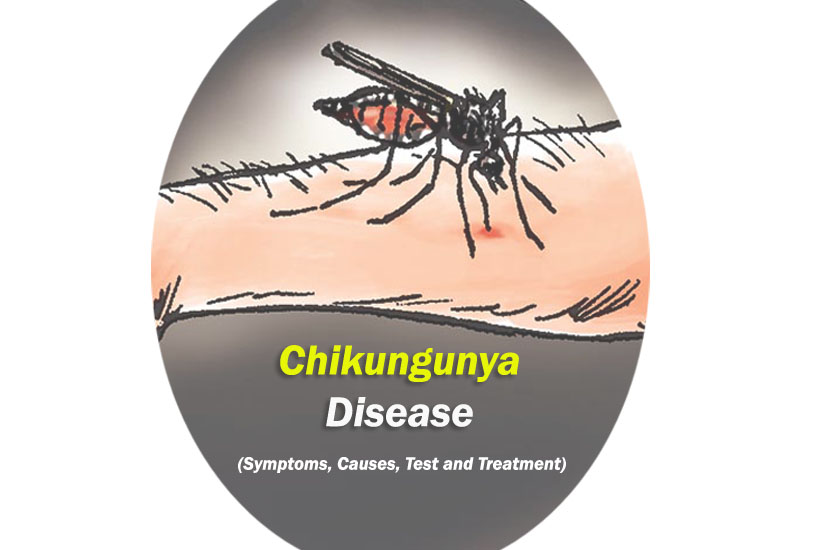 Chikungunya is a disease that is transmitted to humans by infected mosquitoes. It is caused by the Chikungunya virus (CHIKV). We shall covere Chikungunya Disease Symptoms, Causes, Test and Treatment of this disease.

Most people (72% -97%) infected with the chikungunya virus have symptoms. The disease is most often characterized by the acute onset of high fever (typically> 39 ° C [102 °F]) and polyarthralgia. Other symptoms might include headache, myalgia, arthritis, conjunctivitis, nausea, vomiting, or a maculopapular rash. The fever usually lasts from several days to a week and can be biphasic. The rash usually appears after the onset of fever and usually affects the trunk and extremities, but the palms of the hands, the soles of the feet, and the face may be affected.

Joint symptoms are often severe and debilitating, generally bilateral and symmetrical, occurring most often in the hands and feet, but can affect the more proximal joints. Clinical laboratory findings may include lymphopenia, thrombocytopenia, elevated creatinine, and elevated liver transaminases.

People at risk for severe disease include perinatally exposed newborns, older adults (eg, ≥65 years), and people with underlying medical conditions (eg, hypertension, diabetes, cardiovascular disease). Some patients may have a relapse of rheumatologic symptoms (polyarthralgia, polyarthritis, and tenosynovitis) in the months after the acute illness. Studies report varying proportions of patients with persistent joint pain for months or years. Mortality is rare.

Chikungunya virus is a single-stranded RNA virus of the genus Alphavirus and the family Togaviridae and is is transmitted through infected mosquitoes.

The chikungunya virus is transmitted mainly to humans through the bites of infected mosquitoes, predominantly Aedes aegypti and Aedes albopictus. Humans are the main host during epidemics. Transmission by blood is possible; Cases have been documented between laboratory personnel handling infected blood and a healthcare worker collecting blood from an infected patient.

Rare in utero transmission has been documented, primarily during the second trimester. Intrapartum transmission has also been documented when the mother was viremic at the time of delivery. Before 2013, outbreaks of chikungunya infection were reported in countries in Africa, Asia, Europe, and the Indian and Pacific Oceans. In late 2013, the chikungunya virus was found for the first time in the Americas on Caribbean islands.

The virus then spread rapidly through the Americas, with local transmission reported from 44 countries and territories and more than 1 million suspected cases reported in late 2014. In the United States, widespread outbreaks occurred in Puerto Rico and the Virgin Islands. From the US in 2014 Eleven cases of local transmission were reported in Florida in 2014 and one case of local transmission in Texas in 2015. The incubation period is generally between 3 and 7 days (range, 1 to 12 days)

The symptoms of chikungunya are similar to those of dengue and Zika, diseases transmitted by the same mosquitoes that transmit chikungunya. You should visit your doctor if you feel the same situaion as earlier above mentioned.

The preliminary diagnosis is based on the clinical characteristics of the patient, the places and dates of travel and activities. Laboratory diagnosis is generally achieved by testing serum for viruses, viral nucleic acid, or virus-specific immunoglobulin (Ig) M, and neutralizing antibodies. During the first week after the onset of symptoms, chikungunya virus infection can often be diagnosed by performing a reverse transcriptase polymerase chain reaction (RT-PCR) in serum. Chikungunya virus-specific IgM and neutralizing antibodies usually develop towards the end of the first week of illness.

A plaque reduction neutralization test can be performed to measure virus-specific neutralizing antibodies and to discriminate between cross-reactive antibodies (eg, Mayaro and O’nyong-nyong viruses). IgM antibodies usually persist for 30 to 90 days, but a longer persistence has been documented. A positive serum IgM test result may occasionally reflect a past infection. Immunohistochemical staining can detect specific viral antigens in fixed tissue.

Routine molecular and serologic testing for chikungunya virus is performed at state health departments and the Centers for Disease Control and Prevention (CDC). Plaquereduction neutralization tests and immunohistochemical staining are performed at CDC and selected other reference laboratories. analgesics, and antipyretics. In areas where dengue is endemic, acetaminophen is the preferred treatment for fever and joint pain until a dengue diagnosis is excluded to reduce the risk of hemorrhagic complications. Patients with persistent joint pain may benefit from the use of nonsteroidal anti-inflammatory drugs, corticosteroids, and physiotherapy.

There is no antiviral treatment available for chikungunya. The primary treatment is supportive care and includes rest, fluids. Here are some precaustions

A newborn with chikungunya. Appearance on day 3 of admission shows hyperpigmentation of the skin. Reprinted with permission from Reddy VS, Jinka DR. A case of neonatal thrombocytopenia and seizures: diagnostic value of hyperpigmentation.

Refrence:  This complete detail is taken from a medical book. You can downlod further medical related books here