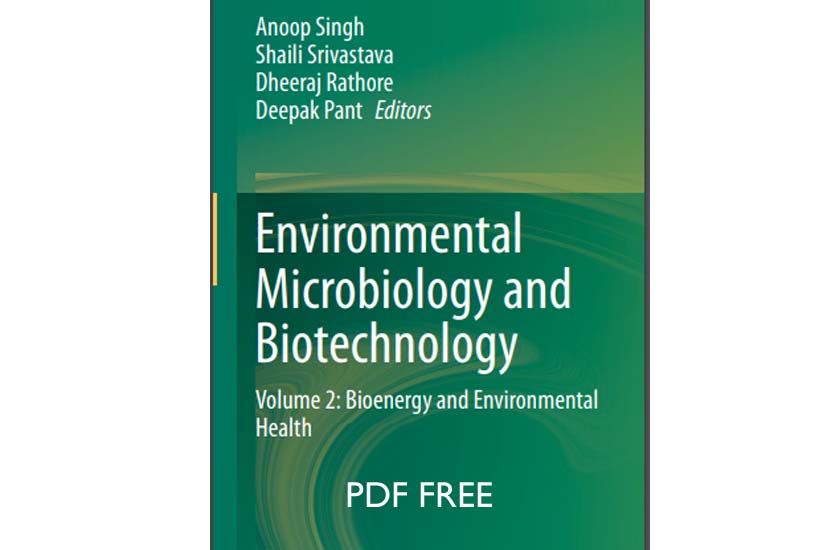 Here is the preface of Anoop Singh’s Environmental Microbiology and Biotechnology Volume 2, The ever-growing energy demand and environmental pollution have induced the search for technologies to harness the power curbed in the biomass and/or biowaste. This will not only provide the energy but also resolve the disposal burden and environmental pollution due to faulty disposal of biowaste. The microbiological and biotechnological techniques can play a great role in finding green and sustainable solutions to the problems related to energy and the environment. Environmental health is broadly concerned with assessing, understanding, and controlling the impacts of anthropogenic activities on the environment and the impact of the environment on people.

A number of environmental health problems, like the effects of toxic chemicals, resource depletion, etc. have been analyzed by researchers. The various microbial strains can be employed for solving different problems of environmental health such as degradation of toxic chemicals and production of value-added products from them, restoring the resources, synthesis of beneficial compounds, etc. Biotechnological tools give an added advantage over microbiological techniques by enhancing the efficiency of employed microbes.
The present book is the second volume of the book ‘Environmental Microbiology and Biotechnology’. In the first volume, we covered three parts, namely: I. solid waste management, II. agriculture utilization and III. water treatment technology. This volume covers two sections, namely: IV. bioenergy and V. environmental health. In Part IV, various biotechnological and microbiological approaches are described for sustainable energy production such as algal biofuel, biogas production, aviation biofuels, etc. This part also includes microbiology of bioelectrochemical systems and applications of biotechnology in oil and gas industries. Part V extends the discussion about applications of microbial biotechnology for better environmental health and covers the topics related to bioinformatics tools for hazardous waste management, modern biotechnological tools for pathogen analysis, environmental interaction of stem cells, pharmaceutical waste management, pathogens, genetic variations, and cancer, CO2 sequestration by microbiological approach, metabolism of dioxins, remediation of heavy metals degradation of phenols, food safety, and preservation, biotransformation of xenobiotics compound, etc.

The book may even be adopted as a textbook for masters and undergraduate university courses that deal with environmental microbiology and biotechnology. Despite the best efforts of authors and editors along with extensive checks conducted by many experts in the field of environmental microbiology and biotechnology, mistakes might have crept in inadvertently. We would appreciate if the readers could highlight these and make comments or suggestions to improve and update the book contents for future editions.

free pdf medical book of Environmental Microbiology and Biotechnology Volume 2 covers such type of content as we have placed below, Fossil fuels are used for the generation of electrical power, as well as liquid fuels. There are a variety of renewable or low atmospheric pollution technologies that can generate electrical power, including solar, wind, hydroelectric, geothermal, and nuclear. However, renewable technologies to supplement or replace liquid fossil fuels are still in their early developmental stages. The International Energy Agency expects that biofuels will contribute 6% of total fuel use by 2030, but could expand significantly if undeveloped petroleum fields are not accessed or if substantial new fields are not identified. The use of liquid fossil fuel as an energy source has long been considered unsustainable and most importantly the liquid fossil fuel will be diminished by the middle of this century.

In addition, the fossil fuel is directly related to environmental degradation and greenhouse emission. Biofuel produced from plants, animals, or algae products can offer an alternative to reduce our dependency on fossil fuel and assist to maintain a

healthy global environment. Microalgae are becoming a popular candidate for biofuel production due to their high lipid contents, ease of cultivation, and rapid growth rate. Fatty acid methyl esters (FAME) are used as alternative diesel fuel originating from renewable sources. The attention is focused on the materials that do not compete with food and feed production. Algae have significant potential as an alternative biodiesel feedstock. In comparison to other crops, they have the advantage in very fast reproduction cycles, enhanced resistance to high UV radiation doses, and higher effectiveness of energy conversion to biomass due to low demands on other metabolic functions. Moreover, they fix atmospheric CO2 very efficiently. Microalgae have benefited

over other sources of biofuel as it fixes atmospheric CO2

The demand for liquid fuels in transport is rising. Nowadays, fatty acid methyl esters (FAME) are accepted liquid biofuels for diesel engines. They are usually prepared from vegetable oils or animal fats. Today, 90% of organic chemicals are based on fossil fuels, meaning they are based on non-renewable resources. Seventy per cent of proteins in the European Union are imported. An alternative is needed. Due to their high growth rate and the small land area required, algae could become that alternative. We are not at that stage just yet.

The challenge is to optimize the algae value chain, from local production to storage and handling, in such a way that it becomes a viable, economically relevant industry. Worldwide, algal biofuel research and development efforts have focused on increasing the competitiveness of algal biofuels by increasing the energy and financial return on investments, reducing water intensity and resource requirements, and increasing algal productivity (Herzog et al. 2001)

The aspiration for producing algal biofuel is motivated by the desire to: (1) displace conventional petroleum-based fuels, which are exhaustible, (2) produce fuels domestically to reduce energy imports, and (3) reduce greenhouse gas emissions by cultivating algae that reuse carbon dioxide emitted from industrial facilities. In theory, algae have the potential to produce a large amount of petroleum fuel substitutes while avoiding the need for large amounts of fresh water and arable land. These attributes have created widespread interest in algal biofuels. In practice, however, profitable algal biofuel production faces several important challenges (Slade and Bauen 2013).

Microalgae are a large and diverse group of aquatic organisms that lack the complex cell structures found in higher plants. They can be found in diverse environments, some species thriving in freshwater, others in saline conditions and seawater. Most species are photoautotrophic, converting solar energy into chemical forms through photosynthesis (Elegbedea et al. 2017).

Microalgae have received considerable interest as a potential feedstock for biofuel production because, depending on the species and cultivation conditions, they can produce useful quantities of polysaccharides (sugars) and triacylglycerides (fats). These are the raw materials for producing bioethanol and biodiesel transport fuels. Microalgae also produce proteins that could be used as a source of animal feed, and some species can produce commercially valuable compounds such as pigments and pharmaceuticals (Chisti 2007).

Photoautotrophic algae: raceway pond systems and photobioreactors (PBRs). A typical raceway pond comprises a closed-loop oval channel, w0.25e0.4 m deep, opens to the air, and mixed with a paddle wheel to circulate the water and prevent sedimentation (Ponds are kept shallow as optical absorption and self-shading by the algal cells limit light penetration through the algal broth). In PBRs the culture medium is enclosed in a transparent array of tubes or plates and the microalgal broth is circulated from a central reservoir. PBR systems allow for better control of the algae culture environment but tend to be more expensive than raceway ponds. Auxiliary energy demand may also be higher. The perceived potential of microalgae as a source of environmentally sustainable transport fuel is a strong driver behind their development and provides the underpinning rationale for much of the public support directed towards microalgae R&D. It is important, therefore, that algae biofuel systems are able to clearly demonstrate their environmental and longer-term economic credentials. Researcher explained three aspects of microalgae production that will ultimately determine the future economic viability and environmental sustainability: the energy and carbon balance, environmental impacts, and production cost (Hannon et al. 2010a, b). 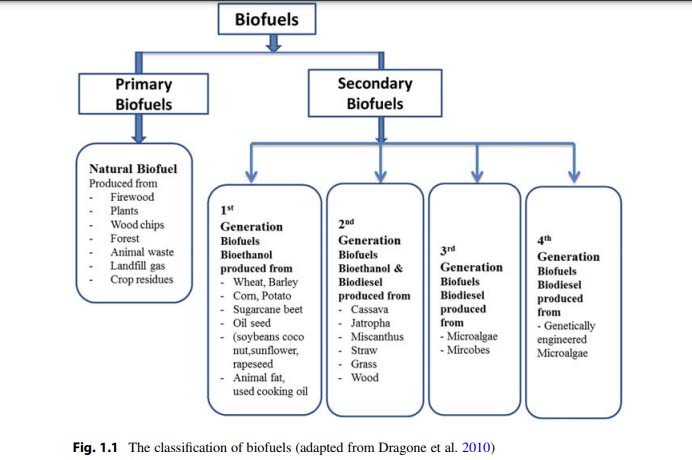 Microalgae are currently being promoted as an ideal third-generation biofuel feedstock because of their rapid growth rate, greenhouse gas fixation ability (net-zero emission balance), and high production capacity of lipids (fat). They also do not compete with food or feed crops and can be grown on non-arable land and saline water. Biofuels are generally referred to as solid, liquid, or gaseous fuels derived from organic matter (Chisti 2007). The classification of biofuels is shown in Fig. 1.1. The oil contents of various microalgae in relation to their dry weight are shown in Table 1.1. It is clear that several species of microalgae can have oil contents up to 80% of their dry body weight. Some microalgae can double their biomasses within 24 h and the shortest doubling time during their growth is around 3.5 h which makes microalgae an ideal renewable source for biofuel production.