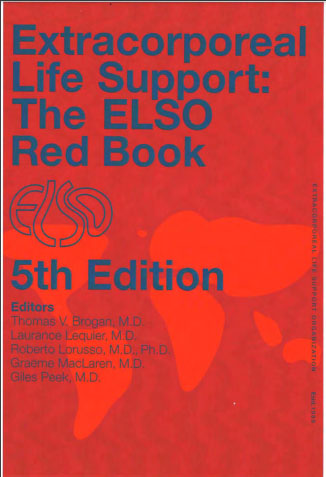 The History and Development of Extracorporeal Support:

“During that long night, watching the patient helplessly fight for life as her blood darkened, I naturally came up with the idea that if it were possible to continually remove some of the blue blood, put oxygen into that blood, and then continuously inject the now – red blood in the patient’s arteries, we could have saved his life. “

Surgeon John Gibbon eloquently described earlier the anguish and helplessness he felt as a young researcher in 1931 over the loss of a young patient to a pulmonary embolism. The memory of that single patient was the impetus for Dr. Gibbon to embark on an effort dedicated to the proposition that mimicking or replacing the normal cardiopulmonary functions of the human body during acute illness could save lives. However, the remarkable history of the development of extracorporeal support dates back to 1693, when Jean Baptiste Denis performed cross-transfusions of blood from a human with the “soft humors of a lamb” to determine whether living blood could be transmitted between two species. (Figure 1-1). 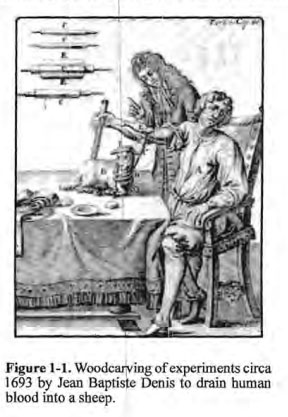 Dr. Benjamin Ward Richardson, a well-known British physician and anesthetist, conducted experiments in the 1860s using injected oxygen and blood propelled by a syringe into the right heart to generate circulation in an animal. The collaborators developed a total body perfusion system, called an “autojector,” which used lungs from excised donor animals for oxygenation of the blood, and later a bubble oxygenator, to perform successful animal experiments with isolation of the heart. 3 Dr. Gibbon began his journey to further advance the field of extracorporeal support in humans in the 1930s. In collaboration with his wife Mary at the Jefferson School of Medicine in Philadelphia, Dr. Gibbon developed a self-contained roller pump device for extracorporeal support. The early Gibbon heart-lung machine was the size of a spinet piano that created thin films of deoxygenated blood that passed through a screen exposed to oxygen. 1,4 Twenty-two years would pass before Dr. Gibbon could use the device in the operating room. On May 6, 1953, he performed the first successful extracorporeal assisted repair of an atrial septal defect on 18-year-old Cecilia Bavolek. 1954 when he performed cross-circulation cardiac surgery and then progressed to use.

ECMO as Bridge to Lung Transplantation

Invasive mechanical ventilation (IMV) may be necessary to help end-stage patients. Irreversible failure awaiting transplantation. The use of IMV has traditionally been associated with poor post-transplant outcomes, which may be attributable to other factors, pre-transplantation of the disease, impaired mobility and complication associated with the ventilator, oxygenation can Ul-Ul.l \ vI,., Ut to maintain adequate gas exchange, in whom IMV is found, although ECMO has also traditionally been associated with poor post-transplant survival, probability of immobility, suboptimal patient selection time for OAB initiation, and complications associated with circulation , hemorrhage, thrombosis), especially when previous generation circuit components were used. 1, 2 However, temporary post-transplant outcomes are improving for bridge-to-transplant (ITB) supported patients 2-5 in the context of an improvement in the risk-benefit of extracorporeal technology, 6.7 advances in design and the cannulation technique, 8,9 and changes both in the initiation of ECMO and in the management once the patients receive the support of ECMO2.
You can download this book Extracorporeal life support the elso Red book 5th edition pdf with direct google drive link below:-
Download