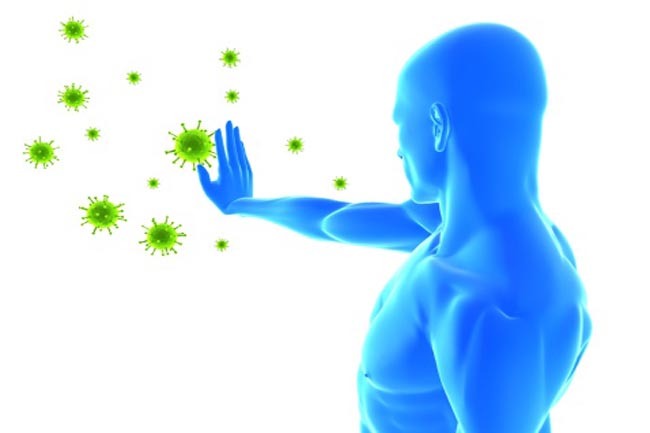 The immune system has evolved to protect the body from damage
caused by microorganisms—bacteria, fungi, viruses, and parasites. This defensive function is performed by leukocytes (white blood cells) and a number of accessory cells, which are distributed throughout the body but are found particularly in lymphoid organs, including the bone marrow, thymus, spleen, and mucosa-associated lymphoid tissues (MALT). Lymphoid organs are strategically placed to protect different areas of the body from infection. Cells migrate between these tissues via the bloodstream and lymphatic system. As they do so they interact with each other to generate coordinated immune responses, aimed at eliminating pathogens or minimizing the damage they cause.

How does the immune system work?

The immune system plays an important role: it protects your body from harmful substances, germs, and cell changes that can make you sick. It consists of various organs, cells, and proteins.

As long as your immune system is running smoothly, you won’t know it’s there. But if it stops working – because it is weak or can’t fight particularly aggressive germs – you get sick. Your body has never been exposed to germs before. The first time you contact them, some germs will make you sick. These include childhood illnesses such as chickenpox.

Without the immune system, we will have no way to fight the harmful substances that enter our body from the outside of the harmful changes that take place inside our body. These are the basic functions of the body’s immune system

To fight and remove disease-causing pathogens such as bacteria, viruses, parasites or fungi,
Identifying and neutralizing harmful substances from the environment, and
To fight disease-causing changes in the body, such as cancer cells.

What are the Parts of the immune system?

The major parts of the immune system are:

White blood cells are a key player in your immune system. They are made in your bone marrow and are part of the lymphatic system.

White blood cells move throughout your body through blood and tissue, looking for foreign invaders (bacteria) such as bacteria, viruses, parasites and fungi. When they are found, they launch an immune attack.

White blood cells include lymphocytes (such as B cells, T cells, and natural killer cells), and many other types of immune cells.

Manage fluid levels in the body
Reacting to bacteria
Dealing with cancer cells
Deal with cell products that would otherwise cause disease or disorders
The intestines absorb some of the fat in your diet.
The lymphatic system consists of:

Lymphocytes constitute about 20% of the total blood leukocytes. The two major populations of lymphocytes, T cells, and B cells, are small lymphocytes responsible for recognizing antigens or antigen fragments. Innate lymphoid cells (ILCs) are a heterogeneous group, which can carry out many of the functions of T cells—the group includes natural killer (NK) cells.

(LGLs) are morphologically defined cells containing large amounts of cytoplasm, with azurophilic granules, which constitute 5–15% of the blood T cells. Both NK cells and γδ T cells have this morphology.

T-Cells are lymphocytes that develop in the thymus. This organ is seeded by lymphocytic stem cells from the bone marrow during embryonic development. The cells then develop their T-cell antigen receptors (TCR) and differentiate into the two major peripheral T-cell subsets; the helper T cells express CD4, and the cytotoxic T cells express CD8. T cells can also be differentiated into two populations according to whether they use an aβ (TCR2) or a γδ (TCR1) antigen receptor. The essential role of T cells is to recognize antigens associated with cells of the host.

These are mixed populations of cells found in submucosal tissues. A total of 10–40% are γδ T cells, with a dendritic appearance. The remainder is mostly CD8+ T cells.

These are capable of destroying virally infected or allogeneic cells. Most CTL cells express CD8 and recognize antigen associated with major histocompatibility complex (MHC) class I molecules, which may be expressed on all nucleated cells of the body,

These cells perform a number of functions, including helping B cells to divide, differentiate, and secrete antibodies, activating macrophages to destroy pathogens that they have phagocytosed, and recruiting cells to sites of inflammation. The functions are carried out by different subsets of Th cells, which differentiate from a common precursor (Th0) and can be distinguished by the cytokines, which they secrete. The majority of Th cells express CD4 and recognize antigenic peptides presented on the surface of APCs by MHC class II molecules.

The spleen is a blood filter that removes germs and removes old or damaged red blood cells. It also makes immune-fighting components (including antibodies and lymphocytes).

Bone marrow is the sharp tissue found inside your bones. It produces the red blood cells that our bodies need to carry oxygen, the white blood cells we use to fight infection, and the platelets that help us clot our blood.

How is the immune system activated?

The immune system can be activated by many different things that the body does not recognize. These are called antigens. Examples of antigens include proteins on the surface of bacteria, fungi, and viruses. When these antigens attach to specific receptors on immune cells (cells of the immune system), a whole series of processes are activated in the body. Once the body first comes in contact with the germs that cause the disease, it usually gathers information about the germs and how to fight them. Then, if it comes in contact with the germs again, they immediately catch the germs. Recognizes and can quickly start fighting it.

The body also has proteins on the surface of its cells. But those proteins do not usually activate the immune system to fight the cells. Sometimes the immune system mistakenly thinks that the body’s own cells are foreign cells. It then attacks the body’s healthy, harmless cells. This is known as an automatic response.

What are Vitamins & Minerals that Boost Immune System?